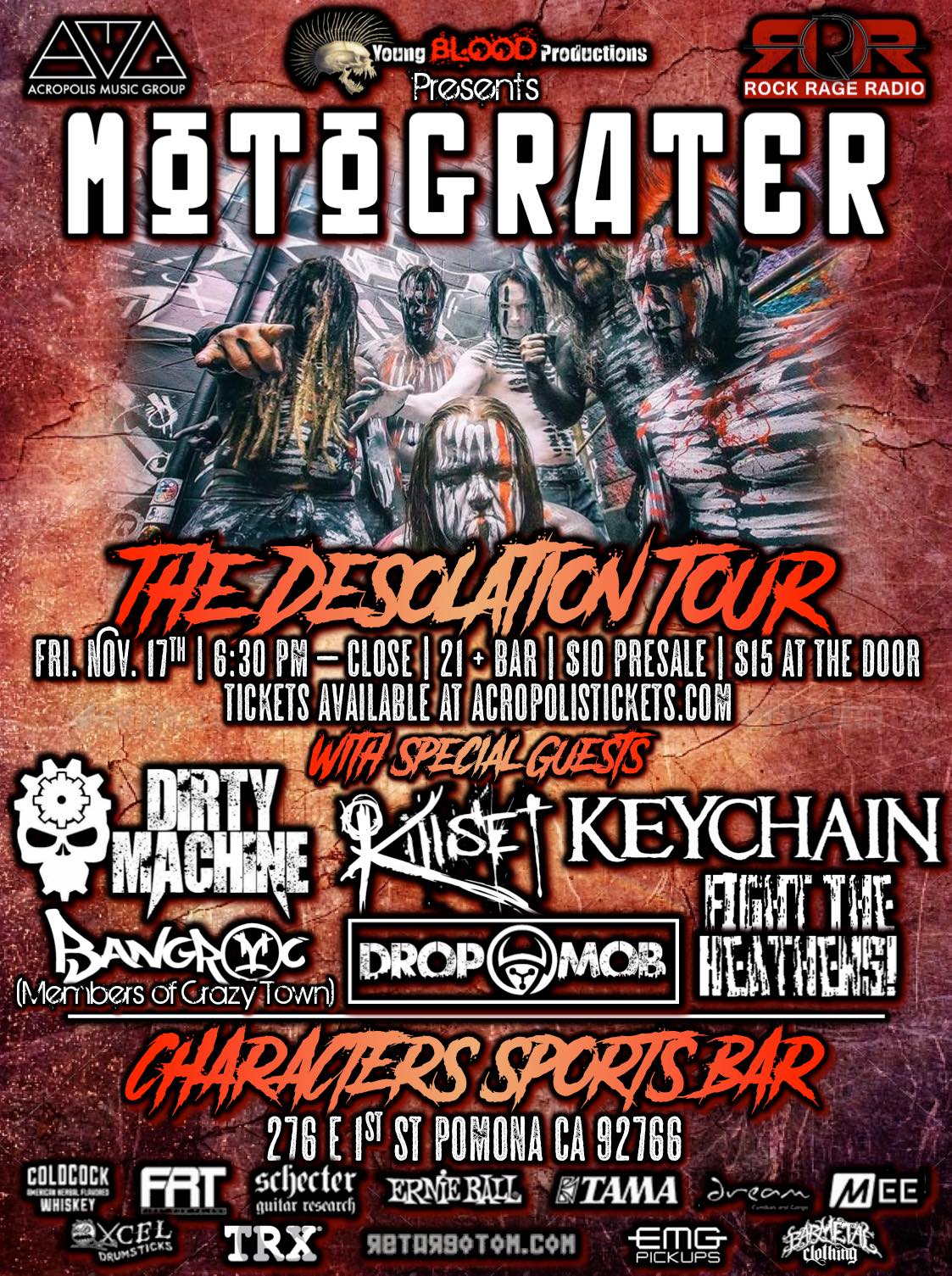 Motograter was formed in 1995 and is most well known for their namesake instrument the “Motograter”, a mysterious contraption designed with industrial cable, guitar pieces, and other components, to create a unique, low, distorted bass sound. The band is widely known for their image, notorious for covering themselves in tribal style body paint. The early stages of the group’s career consisted of heavy experimentation with industrial sounds, samples, and tribal drums. The band released two EP’s ‘Hugh Chardon’ and ‘Indy’ and in 2001 were signed to Sever Records, founded by Dez Fafara of Coal Chamber. The band’s sound continued to evolve, eventually incorporating a dark, groove-oriented guitar styling, that would help broaden the band’s appeal and reach a wider audience. In 2003, the band inked a deal with No Name/Elektra Records and released the highly acclaimed. self-titled album, ‘Motograter’, featuring Ivan Moody (Five Finger Death Punch/Ghost Machine) on vocals. The song “Suffocate” was featured on the soundtrack to the film The Texas Chainsaw Massacre. The song “Down” is featured on the EA Sports video game Nascar Thunder 2004. Motograter toured on Ozzfest 2003. Motograter has toured with Ozzy Osbourne, Korn, Marilyn Manson, Chevelle, Disturbed, Ministry, Nothingface, Kittie, Mushroomhead, Cradle of Filth, Killswitch Engage, Chimaira, Shadows Fall, Voivod, and much more.

Art for DESOLATION was created by Mister-Sam Shearon, who has created covers for comic books and graphic novels including Clive Barker’s HELLRAISER, Judge Dredd, The X-Files, Mars Attacks, KISS, and Clive Barker’s Books of Blood as well as artwork for some of the biggest names in rock music, such as Godhead, Ministry, Rob Zombie, Iron Maiden, Powerman 5000, Biohazard, American Head Charge, Rammstein, Fear Factory and Kill Devil Hill.

“I was actually in (the late) Steve Richards (No Name Records) office the DAY he signed Motograter. And he was SO excited, going on and on about this amazing new band he just signed, that made their own instrument (The Motograter) etc.. Steve was such a cool and infectious guy, and brought such an amazing energy to everything he did, and to this day, that stuck with me.

And now to be able to come back full circle and put out Desolation on EMP, all these years later, and kinda continue that legacy with the current lineup, is really an amazing middle to the story. These guys have worked SO hard for so long, and it is an honor to sign a band that works as hard as MOTO does. Motograter, literally, should be the blueprint any hard touring independent band should follow.”

MOTOGRATER drummer Noah “Shark” Robertson adds, “We are honored and very proud to be working with David Ellefson, Thom Hazaert, and everyone else at EMP Label Group. We have fought tooth and nail to bring people new Motograter music. We can’t wait to unleash this voracious beast that is ‘Desolation’ upon the masses.”

Additionally, Motograter has signed an exclusive deal with JLS Artist Management. JLS is run by former Rock Ridge Music label president Jason Spiewak. Spiewak says “We are stoked to have this opportunity to work with Motograter. These guys are road dogs, ready to work hard and deliver a great record”.