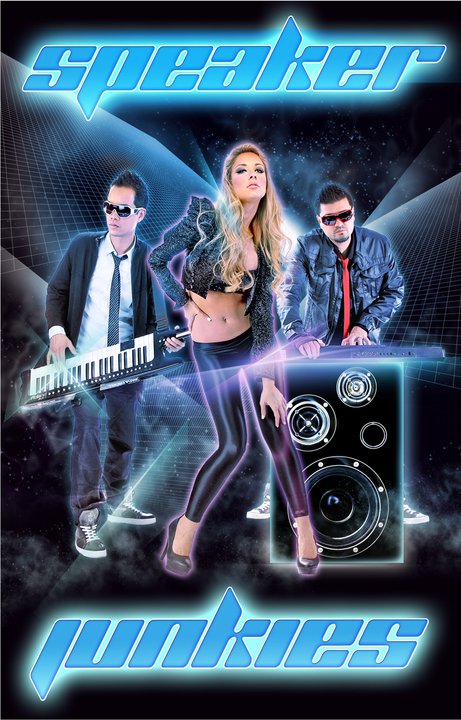 Summer Daniels’ sun-tanned 5’6” frame rests in an airline seat, her blue eyes gazing out the window as she tries to ignore the kid kicking the back of her seat and a stewardess who won’t give her any free peanuts, and silently wishes she was still in Hawaii, her mind wandering back to sipping cocktails and swimming with dolphins. Her daydream could unequivocally be the fantasy of many of her male fans. The 24-year-old model and actress has, however, been attracting a far different fan base lately. Daniels has recently transitioned from the studio and screen to take her rightful place on stage, microphone in hand, as the sexy front-woman of Southern California’s premier electronic act: Speaker Junkies. “I love being in front of a crowd and getting people pumped up! Every time I’m on stage I feel as though it’s what I was born to do,” she admits.

Speaker Junkies, founded in 1999 by Tekno Tom (keytar) and Rezn Tokes (synths), have evolved from a revolutionary underground live duo into a complete band with the addition of Summer Daniels’ vocals and Tempo on drums, pushing and blurring the lines of live and electronic music and are set to storm the mainstream. “We have transformed into a band that many describe as Gwen Stefani, Lady Gaga, Fergie, DJ Tiesto and electro/pop/techno music in a blender,” explains Tom. Rezn elaborates on their musical evolution: “I would describe Speaker Junkies today as futuristic, fun, upbeat, melodic, edgy, spacey, hard and energetic. If you were able to fly a U.F.O. through space or take a journey through your veins and the various lobes of your cerebral cortex you would find that early Speaker Junkies would be the perfect complement to that journey.” “Makes you wanna’ dance all night long!” says Tempo. “We’re an electro-pop band that knows how to get ‘ish started!” says Daniels, summing it up. “Party music!”

Their new self-titled album, a culmination of their talent and experience, can be equally attributed to a tireless work ethic and devotion to a single, driving passion: music. It’s midnight and Tom is still hard at work in the studio, surrounded by posters of his favorite bands and album plaques of his record releases. The music bumps as he monitors the levels, remixing a track called “I Party” by Far East Movement . “The upcoming CD also features our friends from Ultraviolet Sound as well as label-mates DJ ei8ht and Bitter Persona. We are definitely excited and proud of this new CD. This album truly defines what we are today.”